A few things of note:

I wrote a very important (to me) editor’s letter for Drunk Monkeys in regards to the amount of Bukowski-esque (read: revolving around poorly written sex/ penises) submissions we receive. It is infuriating as a woman to have to deal with this malarkey, and I map out why it sucks. Stop doing that, men. No one cares.

By the way, the March issue of Drunk Monkeys is amazing.

At Zoetic Press, two things are happening: we are running a week long 24-hour turnaround on submissions for the low low price of $3. We currently have three calls for submissions, so there’s a lot to choose from! 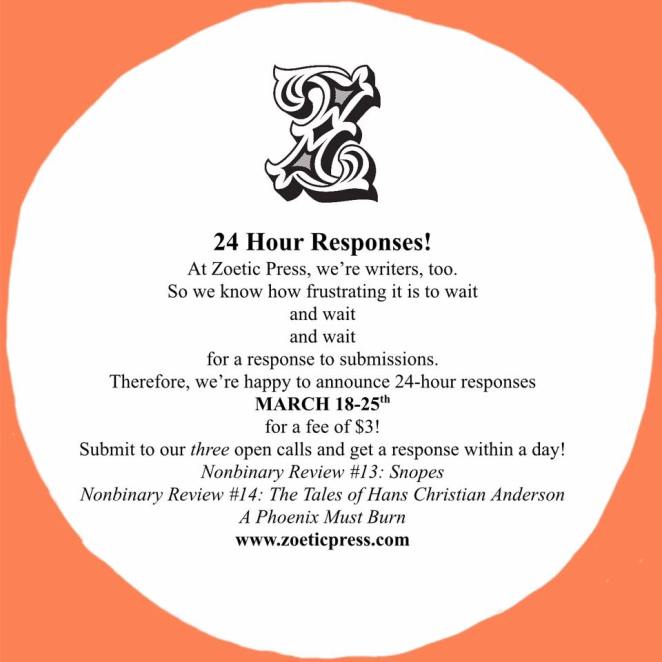 Additionally, I am super excited to announce that I am guest editing Nonbinary Review #13: Snopes/ Urban Legends. I’ve always been obsessed with urban legends, so this is really exciting for me! Here is the call:

Did you know Snopes isn’t just a wonderland of debunked political articles your aunt emailed you? It’s also a smorgasbord of urban legends!

Nonbinary Review is now accepting submissions for issue 13: Snopes/ Urban Legends, through 5/1/17! We don’t just want politically influenced subs– we want your best “sewer rats as pets” and “I definitely saw Nessie that one time”.

We are a paying market: “NonBinary Review pays 1 cent per word for fiction and nonfiction, and a flat fee of $10 for poetry (singular poems or a suite) and $25 per piece of visual art, payable upon receipt of the signed publication contract. In return, we ask for worldwide serial rights and electronic publishing rights. NonBinary Review accepts previously published work as long as the original publication is clearly credited. All contributors will receive a complimentary copy of the issue in which their work appears.”

(And yes, I know that’s not a sewer rat. But still, look at that thing!)

I don’t know if it’s obvious, but I am slowly rebuilding this page, so if it seems weird for a bit, that’s why. I think only like 3 people look at it, but I felt it bears repeating.

Your Hand Has Fixed the Firmament

You can buy my chapbook, Your Hand Has Fixed the Firmament, now from Grey Books Press.